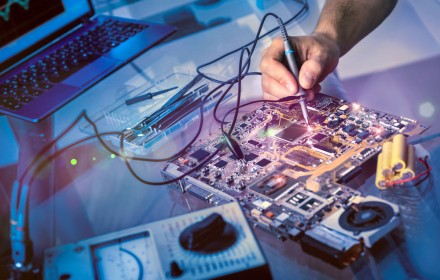 Motherboards are the main printed circuit boards in computers, and are in many other electronics devices including mobile phones, stop-watches, and clocks. They are also called main boards, system boards, or logic boards, and are shortened to Mobo in casual technical reference. They are made by connecting various electrical parts and components, usually with wiring and soldering, to create communications and processing pathways.

The motherboard interfaces between the CPU and the buses and external components. The motherboard determines the computer’s capabilities and houses the motherboard chipset, sockets with microprocessors and memory, memory chips, the system’s BIOS (Basic Input/Output System), clocks to synchronize the various components, slots for expansion cards, power connectors to distribute electricity to components, and heat sinks and fans to cool the system during operation.Motherboards normally last eight to ten years with normal use and care. The computer will not run with a damaged or defective motherboard and manufacturers will replace them if they fail while under warranty. If motherboards fail or are damaged outside of warranty, they will require replacement to be able to run the computer again.Most motherboards will last eight to ten years, although some are defective right out of the box and some fail soon after initial use. Manufacturers will replace them if they fail while under warranty.