Buying A Gaming Desktop That’s Right For The Money 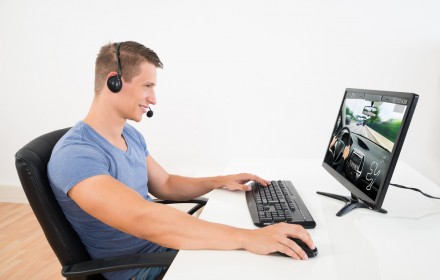 If you’re like me, you’d want to upgrade your current gaming build whenever new games come out or are announced and your current system cannot simply perform to the task or it doesn’t meet even the minimum system requirements.

We are at the end of another tech cycle with next gen consoles being announced and the increased availability of high-end computer hardware that come at reasonable prices.

What should you look for when shopping for the next gaming desktop?
The brand is one of the first factors you should be taking into account. Sure, plenty of brands have surfaced recently, but some of the more established ones still offer top choices when it comes to gaming computers. I’m thinking of Alienware, Acer, Cybertron or iBuyPower. Alienware is a co-brand of Dell and they produce extremely powerful and durable gaming desktops.

Acer is known to produce laptops, but they also have the Predator-G series of desktops which are optimized for gaming purposes.

Cybertron and iBuyPower are relatively new brands but they are known for top computer builds and implement new hardware components into their builds frequently.

What about the installed hardware? The next-gen gaming computer should carry either a 3rd Generation Intel processor or one of the newer six or eight core AMD processors, along with at least 8 GB of RAM and a high-end graphics card from either the Nvidia Geforce 660 line or starting at the 7000 series for AMD.

Other features to take note of would be the addition of the new USB 3.0 ports. These are up to ten times faster in data speeds transfer than the previous USB 2.0 standard.

Also, a gaming desktop will run smooth using an SSD drive instead of a traditional hard disk drive. This should be your decision entirely.

You need to figure out what’s better: more storage or a faster operating system. If you opt for storage, your aim should be in the 1-2TB storage space, since this can store a lot of music, games, movies and so forth.

SSDs are known to perform up to 12 times faster than regular hard disks and improve boot up times to a few seconds when compared to the traditional spinning disks. They are far more reliable, don’t produce heat or noise and can seriously increase your overall system performance.

The case the desktop comes in should allow for sufficient cooling options, either liquid cooling or proper air cooling. It should also be easy to handle, open up for cleaning and allow for future upgrades when the time comes.